In 1985 seven people got together to discuss what could be done to form a Unity Church in Palm Harbor. With the approval of the Unity Association, it was decided to proceed with the formation of the Unity Church of Palm Harbor. The first church meeting place was at Innisbrook, but just briefly. Soon the budding congregation moved to a place above a bar on Tampa Rd. near the entry to the Lake St. George subdivision. Randy Schmelig was the pastor. Betty and Al Fleming soon came to serve as the youth coordinators. Betty had served as the Southeast Regional Youth Director prior to Bob Fortner’s assuming that position. Eventually the rent became too high above the bar and the church launched a campaign to purchase a property on 2 ½ acres on Fisher Road. A Board was formed so UCPH could buy the property.

In 1994, shortly after the property was purchased, Randy announced he was leaving to go to a church in St Louis. For a while the congregation moved from place to place, such as an elementary school cafeteria behind Sweet Tomatoes off US 19 and then the Masonic Lodge in old downtown Palm Harbor.

With Randy’s departure a search was initiated for a new minister. Geri Glinski was the board president. She and the rest of the board, which included Leroy Mathis and Charlie Mitchell, really kept the church together during that transitional time. Daveen Davis, served as an interim Minister and was the primary speaker, with Bob Fortner as a regular guest speaker.

Rev. Bob Fortner As Our Leader for 25 Years

The board continued the search for a permanent minister and Bob Fortner was approached about this position. While he was a licensed teacher, he was not an ordained minister. As Divine Order would have it, Thomas E. Witherspoon, the author of the book, The Mother of Unity, had taken Bob aside and told him that he felt Bob should become a minister, “To take up his real Life’s Work.”

Since Bob would have to undergo the process of field licensing, Les Saunders, a retired Unity minister, was brought in to advise and serve as the acting minister, with Bob as his assistant, for a period of several months. Bob acted as the Senior Spiritual Leader. That important year was 1995. Unfortunately, it turned out that the Fisher Road property was not appropriate for our needs, so, the church moved to a medical center next to Joanne’s Fabrics near US 19 on Curlew Road. The church grew considerably during this time.

Geri Glinski continued as board president, but while at Curlew Rd. she left to pursue her own path to Unity ministry. Youth Education continued during this time, under the effective leadership of Theresa McComber. Toward the end of our stay on Curlew Rd. in 1996, UCPH was fortunate enough to hire Brigitte Bernhardt as Youth Education Director, a position she still holds today.  The youth ministry has become vital and strong under her leadership. 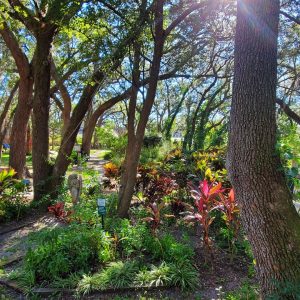 While still on Curlew Rd., the flower ministry came into being, under the tutelage of Alyson Lopez. Kimen Mitchell, Judith Overcash and Sharon Price were part of the original team.

The First Choir and Growth of Our Music Team

Michael Potts started our choir and was our first director. We’ve had several accompanists through the years. Sometimes we struggled to keep going after one left and we found another, but when Ellie came, we found our stability. Her daughter Amy Foster was choir director at that time, but Ellie stayed with us even after Amy decided to step down. Joy Katzen-Guthrie later joined us and has done an outstanding job, continuing to help us build our music ministry. Joan Williams has contributed for many years and done a marvelous job, as well. Then Terrell and Michele Lovett joined us and our music ministry continued to flourish with the addition of the Krouts, Judy Amorello, Fran Pittman, Tommy and Deb Walsh and others.

In the late 1990s, a visioning exercise was conducted and the participants were asked to envision the ideal site for our church. They envisioned 5 acres with trees in Palm Harbor. That seemed like a pipe dream, but after an extensive search, the current property was found at a cost of $352,000. Ironically, records showed that the realtor had looked at this property for us 10 years earlier but it was tied up in the courts. Finally, everything came together and UCPH closed on the current property in April 1999 and took occupancy the first Sunday of July 1999. The church was housed in what is now the Fortner Building.

At our first Sunday service, we did not have a certificate of occupancy (COO) so we met under the carport. As it was the peak of summer, we had four big construction fans cooling us off. We were blessed in that it did not rain for the four Sundays we met outside. After many meetings and proceedings, we obtained the COO and began to meet in the living room of the original house – now our Fellowship Hall. We had seating for 80 people in the main room with additional seating for 32 in the adjacent rooms. Bob had completed the field licensing program and was ordained in 2002 with over 200 in attendance.

In late 2004, a team from Unity was hired to conduct a feasibility study regarding the construction of a new sanctuary. The study revealed the excitement and commitment of the congregation for this project, so we embarked upon a Capital Campaign in 2005.

Our Campaign Slogan was: “Building Together…Growing in Faith.” – A permanent list of those who contributed is installed on the wall in the church foyer. We had the first service in the new sanctuary on Good Friday and then the official dedication on Easter Sunday, 2007. Not long after occupying our new sanctuary, we gained our most excellent associate minister, Marilyn Earhart. In a fortuitous two for the price of one move, her husband Rob joined us in 2008.

UCPH has continued to grow in membership and spiritual consciousness.

Today we are much more than a Church. We are a Spiritual Community providing services to our families, members, and friends in the community. We are here to serve those who are seeking to satisfy their deeper spiritual hunger.

Twenty-five years ago, Bob Fortner was led to Unity Church of Palm Harbor. At the end of December 31, 2020, Rev. Bob Fortner hung up his stole as the full-time senior minister of Unity of Palm Harbor and entered Emeritus status as he embarks on a new adventure into retirement.  With love and gratitude, we released Rev. Bob Fortner as our leader and good shepherd.

In the Fall of 2020, Unity of Palm Harbor founded a search team to seek our new Spiritual Leader. As Unity Truth students, we put the Power of Prayer to work supporting our search committee in their efforts. After interviewing a number of candidates and drawing the search to a close, we welcomed Rev. Tracey Quillen, a former intern at Unity of Palm Harbor, as our new senior minister on December 13, 2020 with an installation service conducted by Rev. Bob Fortner and Rev. Carole O’Connell, who had served as mentors to both Rev. Tracey and Rev. Bob throughout the years. 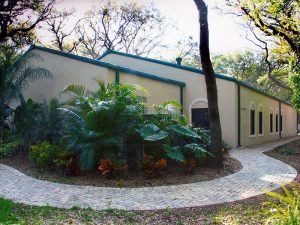